Written by Valley of the Sun United Way
Published on Apr 5, 2018

Saturday, March 31 was Cesar Chavez Day. To honor his legacy, partners in government, business, and community came together with Valley of the Sun United Way to move forward in breaking the cycle of poverty at the grand opening of the Harmon Garden.

Harmon Garden was first established in over 10 years ago. It has been used as a space to grow food for many years. A little over a year ago, the garden was shut down as it needed to be rehabilitated. United Way worked alongside the City of Phoenix Housing Department to rebuild and reopen the garden. Together, community members and volunteers installed 19 new garden beds. The care of each of those plots has been assigned to community residents through a lottery system that will ensure fresh produce is grown in Central City. Nearly 250 residents and community members attended to celebrate the re-opening of Harmon Garden, visit the more than 30 vendors there to provide much needed information and resources, and join in the Easter egg hunt at Harmon Library.

To honor Cesar Chavez, Aguila Youth Leadership with the City of Phoenix Parks Department and United Way installed the city’s first Peace Pole. The Peace Pole is a symbol of hope and peace for the community, just as Cesar Chavez inspired through his non-violent advocacy for social justice. The Peace Pole carries the message, “May peace prevail on Earth” written on the pole in several languages. 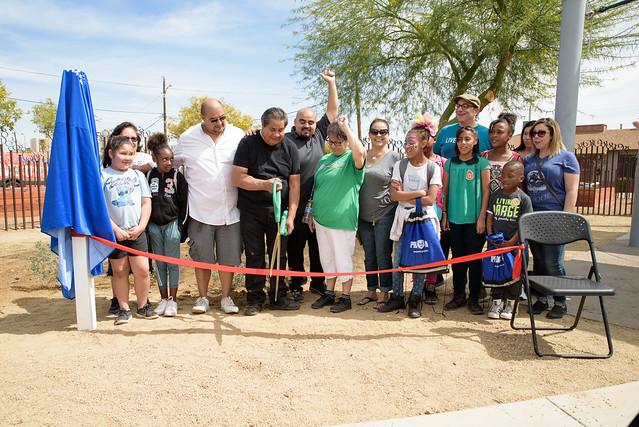 You can join the fight as we continue to break the cycle of poverty in Maricopa County. Change won’t happen alone.